Extrusion technology is one of the most productive processing methods for manipulating plastic. The raw material is forced from a pressure chamber through an extrusion head into an opening, where the shape and size of the semi-product are fixed by a calibration unit then the item is cooled and removed by a lift-off device. Extrusion is a continuous production method that enables us to make shaped sections, tubes, strips, sheets and foils, or to line or coat other materials. 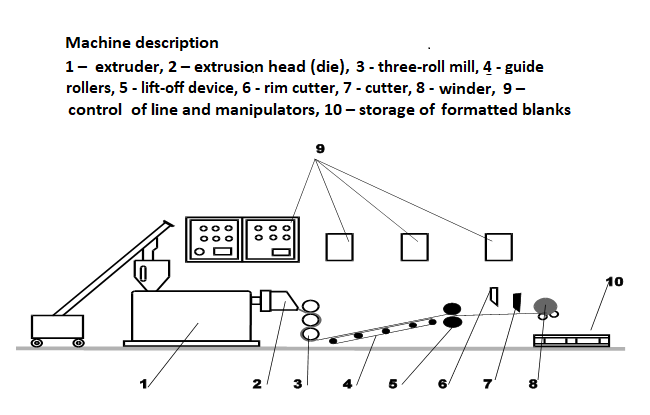 It is a relatively commonplace process. The basic line layout is the same, the only difference being in the tail-end section with a foil winder and sheet cutter – often in combination with a stacking unit (manipulator), whereby the sheets are formatted into blanks. Sheets of soft polymers can also be wound up.
Procedure: Melt webbing from the extruder die is cooled on a three-roll mill, where the foil or sheet is lent its final appearance and thickness.
The products can be plain or embossed on one or both sides, depending on the roller´s surface, as well as perforated and ionized.
Many polymers are processed in this way: LDPE, HDPE, EVAC, PVC, PP, PS, HPS, ABS, PET, PAD, PC, PMMA.
The thickness of foils ranges between 0.2 mm and 1 mm, and the maximum thickness of sheets is 12 mm. However, sheets of polyolefin can be made at 30 mm and – in extraordinary cases, utilizing special equipment, even 50 mm is possible. Sheets of polyolefin of thickness above 12 mm are made on a four-roll mill by pressing several separately extruded strips together

Extrusion is an operation consisting of melting a polymer (supplemented with additives) in an extruder and continuously extruding the plastic melt through an extrusion head into an opening. Extrusion technology is used to manufacture either final products or semi-products.
Extrusion technologies are classified  as these three basic groups according to the shape of the final product or semi-product:

Worm extruders are most commonly used in the industry. They do not work separately, but are installed in production lines alongside other machines and devices for calibration, lift-off, splitting and, in certain cases, additional shaping or surface modification.
The main part of the extrusion line is the extruder. It is composed of the worm extruder and heated casing. All the plastic mixture components are dosed in the extruder casing in an exact ratio, and mixed via the worm extruder, wherein the are – homogenized, melted – and plasticized, and then carried to a flat extrusion head, also called a die. The melt is manipulated by this into the form of a continuous web, whose shape is fixed via three calendar rolls, lending the foil or sheets their final appearance and thickness.
The products can be plain or embossed on one or both sides, depending on the roller´s surface, as well as perforated and ionized.
The strip is then cooled and wound up or formatted to the required size.

You can find out more about which cookies we are using or switch them off in settings.

This website uses cookies so that we can provide you with the best user experience possible. Cookie information is stored in your browser and performs functions such as recognising you when you return to our website and helping our team to understand which sections of the website you find most interesting and useful.

This website uses Google Analytics to collect anonymous information such as the number of visitors to the site, and the most popular pages.

Please enable Strictly Necessary Cookies first so that we can save your preferences!